So-- my young man is about to turn 25 and we are hosting a party for him,
Obviously, he is old enough now-- unlike in grade school-- to have a say in every part of the planning. [Except the secret silly things I am doing, like making buttons with his picture on them!]

So, we have discussed that many of the party platters are not for him--pates  Cheeses. However, I did make special beef tenderloin skewers with garlic and mustard and chicken skewers in lemon and capers. Those too will be surprise, I hope.

But he knows there will be Italian prosciuttos and cotto ham, sopressata and salame that he can have as well as lots of crudite-- for which I plan a special black bean and salsa dip, instead of ranch or sour cream and dill.  He wanted 'elegant' appetizers and not chips et al  that usually accompany the words 'Millennial' and "party."

So-- the birthday cake-- should there be a cake for an open house type party? Hmmm-- his cakes have always been delicious but definitely homemade looking.  Not only am I a pretty useless baker, but there can be no dairy, no eggs, no wheat, no nuts --which comes together into a charming but very low cake.  I won't say flat... but low.
So, I've been experimenting.
First, mini-cupcakes: well the lemon ones came out OK.. but not great, At least they rose over the top of the paper holders.  Unlike the chocolate ones which basically refused to rise, then sunk into themselves as they cooled.
Stuck all of that  in the freezer for a rainy day snack.
Then I had the brilliant idea of brownie bites!  So I made the delicious Glutino double fudge brownie mix, gently spooned it into mini-cupcake pans and baked....
Wellllll, not exactly a slam dunk.
The brownies looked good-- just like little bites of chocolately goodness.  Brownies don't have to rise and have a little peak that you can frost at the top-- so that was great.  But-- and this is a big 'but'-- these brownies wouldn't pop out of the paper cupcake cups.  They just stuck in there. I froze them, hoping it would help... it didn't. In fact, made it worse-- couldn't even dig it out with a spoon.
Those went into the garbage-- after I struggled and  consoled myself with a few.
Third, I tried chocolate chip cookie mix.  I use, and always have, CherryBrook Farms Gluten Free mix.  It's easy and delicious and requires only vanilla and margarine and some water.  So totally safe,
This time: A winner!  The batter rose over the mini cups and held their shape after they cooled. They looked adorable-- and tasted delicious.  Yay; They froze well [don't want to be cooking 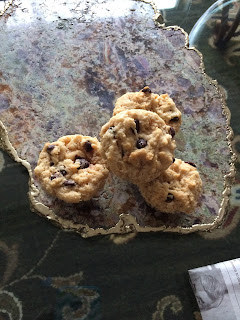 day of the party] and came out of the paper wrappers with ease! Double Yay!

So,along with the Italian antipasto, and the Prosecco and Champagne, there will be chocolate chip minis to enjoy-- And lots of friends to raise a glass and celebrate! 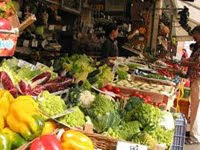 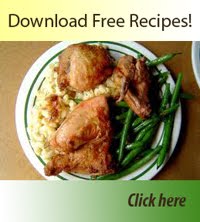